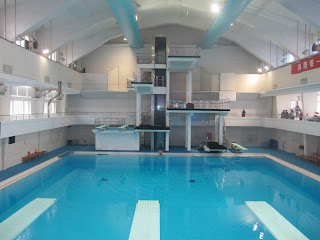 Jet lag got the best of me so I did not sleep well the first night. Breakfast that next morning was an incredible buffet with more food that any person could even dream of eating. There was not much "American style" breakfast food but as they say: "when in Rome....."
After breakfast we headed to the National Aquatic Training Center. This was a special treat for us because it is not open to the public and there are guards at the gated entrance to the complex. After a brief introduction meeting with the facility director, we were taken to the famous dry land training room where a number of the younger Chinese National Team divers were practicing. Unfortunately, this room is considered "State secret" and we were strictly forbidden from taking photos in the dry land room. However, I can tell you that there were 15 (FIFTEEN) Cheeseboards on Short Stands into foam landing pits. These were surrounded by 6 (SIX) large trampolines with overhead spotting rigs and at the far end of the room was some one meter platforms and another diving board that went into a large in ground foam pit. Oh yeah -- one more thing -- there was another identical room just down the hallway. INCREDIBLE!!
We were then taken to the actual diving well where the training takes place. (See the photo above). There were 10 Springboards and a full set of towers. There was a "Bubbler" machine and overhead spotting rigs above a one meter and three meter springboard. The platforms were covered with 2-Ply Black Rough-tex and there were cameras and other recording devices all over the place. It was VERY WARM and humid in the pool area.
After a VERY short visit, we were whisked out of the building and to our waiting motor coach for travel to the Forbidden City and Tiannaman Square. We did not get to see any of the SEVEN Olympic Gold Medallists from China as they were all in Guangzhou for the 2010 Asian Games which we will attend in about a week.
Posted by Steve Voellmecke at 9:45 AM

I was surfing through the internet to get the fine idea for shipping of my car and instead of fine I got the finest though! Check out A-1 Auto Transport for all the latest offers!

An intriguing discussion will be worth comment. I’m sure that you need to write more about this topic, it might not be a taboo subject but usually consumers are too few to chat on such topics. To another. Cheers TrainingRoomSG

How do you fill out a horse hip bone area? training room rental Singapore