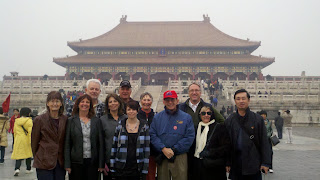 WOW and I mean WOW!! Talk about a palace -- the Forbidden City was built in the early 1400's and was occupied by 24 emperors up until circa 1925 when it was opened to the public. Now millions and millions of people tour this area that takes up 720,000 square meters and it surrounded by a 52' wide moat that was dug by hand by some of the 3,000,000 laborers who built this amazing place in about 20+ years. It has incredible palaces, buildings, pathways, etc. that are too numerous to count and they seem to go on forever and ever! The movie "The Last Emperor" was filmed on location here and it would be hard to get the same shot twice because you simply cannot fathom how big this place is until you walk around it for a couple of hours. No pictures can do this place justice.
Posted by Steve Voellmecke at 10:06 AM

Hi, I agree with you. Really this blog is very informative.