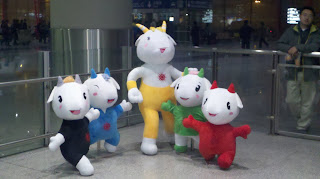 Thirteen plus hours on an airplane is rather difficult. After you have been flying for what feels likes DAYS, the TV monitors tell you that there are only 5.5 hours remaining!! The temperature outside the plane is -65 degrees and you are 40,000 up in the air somewhere above Siberia!
We landed at Beijing International Airport -- Terminal 3 -- which was built just for the 2008 Olympic Games and it was like many things we saw on TV during the Games HUGE, INCREDIBLE and a bit ostentatious. Luckily, there were hardly no other passengers there at the time so we breezed right through security and headed to dinner at a local Dim Sum restaurant. After dinner, it was check-in at the hotel and then straight to bed!!
The picture above shows the Olympic Mascots near the exit of the airport. There were also some Terra Cotta soldiers "guarding" the gate.
Posted by Steve Voellmecke at 9:34 AM