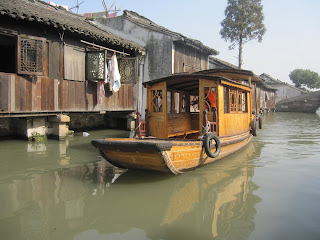 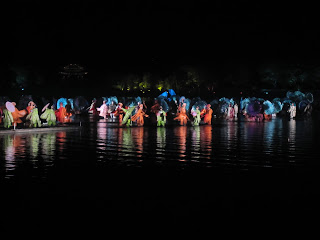 Our travels took us to The Ancient Water City of Wh Zhen (also known as "The Oriental Venice"). Here we toured a bed museum; a textile museum; a Chinese Whiskey Distillery that included a taste test -- UGH!!; and then took a boat tour on a water taxi (Chinese gondola). out next adventure took us to a resort town outside of Hunagzhou where Chairman Mao Tse Tung had a lakeside villa and spent much time there. It was here that we saw an incredible Water Ballet called "Impression West Lake." The show was directed by the same man who directed the Opening Ceremonies at the 2008 Beijing Olympic Games. It was incredible. They had built a stage about one inch underneath the surface of this HUGE lake and there were probably 500+ performers in costume and with an amazing light show and sound track where the actors appeared to walk and dance on water. It was absolutely amazing!
Posted by Steve Voellmecke at 9:02 PM