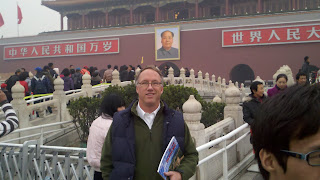 Just outside The Forbidden City is the largest city centre in the world. It is called Tiannaman Square and it is MASSIVE. In the center of the square is the mausoleum that holds the remains of Chairman Mao and at one end is the famous giant poster of the former leader of The People's Republic of China. There are street vendors EVERYWHERE hawking their goods and they do not take "NO" for an answer. It was eerie to be standing in the same place where the famous student rebellion took place nearly 20 years ago. We were told the square could hold at least 1,000,000 people! WOW!
Posted by Steve Voellmecke at 10:16 AM