The Water Cube and The Bird's Nest! 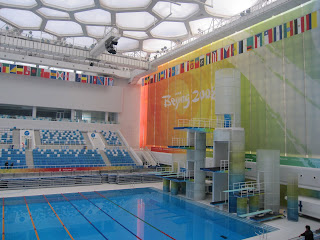 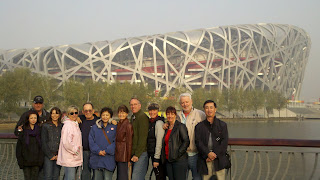 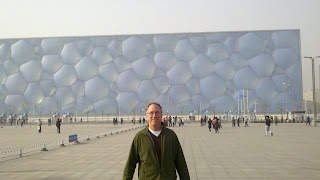 We drove to the Olympic Village to see The Water Cube (swimming and diving) and The Bird's Nest (opening and closing ceremonies as well as track and field events). these iconic buildings are right next to each other and are even more impressive in person. We were able to go inside both of them and we certainly spent more time inside The Water Cube taking many pictures of the diving facility. Jan, Doug and Mark (from Duraflex) and me were hoping we could get on deck to see the diving equipment up close but we were unable to do so. The "powers to be" were not on site this day and the people in charge were not able to grant us permission to get on deck so we simply took pictures and took in the sites and recalled all the thrills we witnessed on TV two summers ago during the 2008 Olympic Games.

The street vendors were everywhere outside the buildings but the massive gift shop inside The Water Cube was a big hit with our group. After leaving the Olympic Village -- it was off to get a quick bite to eat before heading to the airport to catch our flight to Shanghai.
Posted by Steve Voellmecke at 6:40 PM