Learn From The Judges? 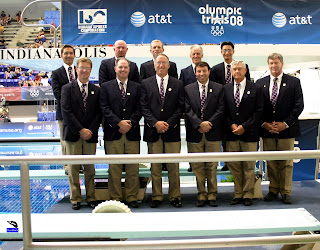 One of the best young diving coaches in the United States is Loren "Buck" Smith -- the very accomplished coach at Eastern Michigan University. I had the honor and pleasure of judging the Olympic Diving Trials with Buck. Before and after each event at the Olympic Trials, the judges had a briefing and de-briefing -- where we discussed things we saw or wanted to review or discuss -- it was very informative for all and really seemed to help "fine tune" the judging.
During one of our de-briefings (which occurred after each event) Buck mentioned what I think is a GREAT IDEA -- that is, the JUDGES should write reports TO THE COACHES at the completion of certain big meets -- to tell them what they feel would improve their divers and ultimately improve their position in the standings. If the coaches could be handed a sheet at the end of the meet that told them WHY the judges scored certain dives in certain ways, as well as a list of things that the judges liked AND disliked about their divers and the dives they did -- Buck (and the rest of the Olympic Trials Judges -- including me) think this could be very beneficial to the continued improvement and progress of diving in the USA.
Only time will tell if the coaches will embrace such a cutting edge idea.
Posted by Steve Voellmecke at 10:21 PM

Thank you for the nice comments. It was a pleasure judging with you, and you yourself have done so much for this sport. The rest of us are just trying to keep up with you!

I think this is a FANTASTIC idea! When I was diving competitively, I would have loved to have known why a coach gave me a certain score. And now as a coach, I would love to have another eye, pick up on some of the corrections that my divers need to make. Great suggestion!