WHAT TO DO WITH OLD DIVING T-SHIRTS 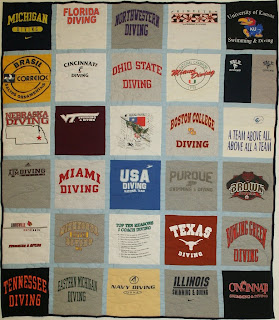 This is the second quilt that I have had made using my old diving T-shirts as well as many collegiate diving T-shirts and Sweatshirts I have collected over the years. Most of these were gifts from college diving coaches around the country. (Click on the image above to make it larger)

My favorite T-shirt in this quilt, however, is the center one -- taken from the back of the old Moss Farms Diving Team T-shirts. It was given to me in 1994 by Robert "Moose" Moss and it has the emblem of the Flying Tigers in the center surrounded by the (reproduced) signatures of all (at the time) living former Flying Tigers. These legendary WWII Veterans were highly decorated for their daring and courageous exploits during the war with Japan in the Pacific. Their picture hangs in the Smithsonian Institute among many other places. Moose was granted permission by the Flying Tigers to use their emblem as the emblem for the Moss Farms Diving Team.

Moose Moss's signature is in the upper right hand corner of the T-shirt.
Posted by Steve Voellmecke at 11:12 AM

steve thats a cool idea for a quilt, i like crafty stuff like that, "see ya on the deck"