If You Guessed John Narcy -- You Were Correct! 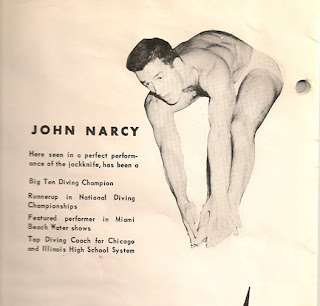 The person you see pictured above and below was born to Polish immigrants and raised in the ghettos of Gary, IN. John Navrotsy -- better known as JOHN NARCY, was the legendary diving coach at Michigan State University for 38 years. During that time, he coached Olympians, National and International Champions as well as many Big 10 Conference Champions.
"Narc" (pronounced "Narse") as he is called by most who know him, was a diver at the University of Michigan where he went to school on a FOOTBALL scholarship. The reason: His best friend in high school was a highly recruited football star and Michigan thought that this friend would follow John wherever he went to college so they gave Narc a football scholarship (to dive) and his friend indeed followed him there.
Narc was coached at Michigan by another diving legend -- Olympic Gold Medallist Bruce Harlan -- the first collegiate diving coach in America. After Harlan's tragic death while dismantling scaffolding following a diving show, Dick Kimball (another diving legend) became the Michigan Coach.
Narc -- an incredible story-teller (and joke-teller as well!!) still lives in East Lansing, MI with Pat, his wife of 49 years. He recently retired from teaching at Michigan State but can still be found on the pool deck judging at the Big 10 and NCAA Championships.
Posted by Steve Voellmecke at 9:39 AM